These 8 books are a great place to begin or strengthen your anti-racist journey.

1. Natives: Race & Class in the Ruins of Empire – Akala

A searing modern polemic and Sunday Times bestseller from the BAFTA and MOBO award-winning musician and political commentator, Akala.

From the first time he was stopped and searched as a child, to the day he realised his mum was white, to his first encounters with racist teachers – race and class have shaped Akala’s life and outlook. In this unique book he takes his own experiences and widens them out to look at the social, historical and political factors that have left us where we are today.

Covering everything from the police, education and identity to politics, sexual objectification and the far right, Natives will speak directly to British denial and squeamishness when it comes to confronting issues of race and class that are at the heart of the legacy of Britain’s racialised empire.

In Black and British, award-winning historian and broadcaster David Olusoga offers readers a rich and revealing exploration of the extraordinarily long relationship between the British Isles and the people of Africa. Drawing on new genetic and genealogical research, original records, expert testimony and contemporary interviews, Black and British reaches back to Roman Britain, the medieval imagination and Shakespeare’s Othello. It reveals that behind the South Sea Bubble was Britain’s global slave-trading empire and that much of the great industrial boom of the nineteenth century was built on American slavery. It shows that Black Britons fought at Trafalgar and in the trenches of the First World War. Black British history can be read in stately homes, street names, statues and memorials across Britain and is woven into the cultural and economic histories of the nation. Unflinching, confronting taboos and revealing hitherto unknown scandals, Olusoga describes how black and white Britons have been intimately entwined for centuries. Black and British is a vital re-examination of a shared history, published to accompany the landmark BBC Two series.

3. Why I’m no longer talking to White people about race – Reni Eddo-Lodge

In 2014, award-winning journalist Reni Eddo-Lodge wrote about her frustration with the way that discussions of race and racism in Britain were being led by those who weren’t affected by it. She posted a piece on her blog, entitled: ‘Why I’m No Longer Talking to White People About Race’.

Her words hit a nerve. The post went viral and comments flooded in from others desperate to speak up about their own experiences. Galvanised by this clear hunger for open discussion, she decided to dig into the source of these feelings.

Exploring issues from eradicated black history to the political purpose of white dominance, whitewashed feminism to the inextricable link between class and race, Reni Eddo-Lodge offers a timely and essential new framework for how to see, acknowledge and counter racism.

It is a searing, illuminating, absolutely necessary exploration of what it is to be a person of colour in Britain today. 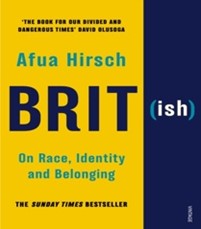 Your partner, your children and most of your friends are British. So why do people keep asking you where you are from? Brit(ish) is about a search for identity. It is about the everyday racism that plagues British society.

It is about our awkward, troubled relationship with our history. It is about why liberal attempts to be `colour-blind’ have caused more problems than they have solved. It is about why we continue to avoid talking about race.

We are convinced that fairness is one of our values, but that immigration is one of our problems. Brit(ish) is the story of how and why this came to be, and an urgent call for change.

Not being racist is not enough. We have to be antiracist.

In this rousing and deeply empathetic book, Ibram X. Kendi, founding director of the Antiracism Research and Policy Center, shows that when it comes to racism, neutrality is not an option: until we become part of the solution, we can only be part of the problem. Using his extraordinary gifts as a teacher and story-teller, Kendi helps us recognise that everyone is, at times, complicit in racism whether they realise it or not, and by describing with moving humility his own journey from racism to antiracism, he shows us how instead to be a force for good.

Along the way, Kendi punctures all the myths and taboos that so often cloud our understanding, from arguments about what race is and whether racial differences exist to the complications that arise when race intersects with ethnicity, class, gender and sexuality. In the process he demolishes the myth of the post-racial society and builds from the ground up a vital new understanding of racism – what it is, where it is hidden, how to identify it and what to do about it.

6. White Fragility: Why It’s So Hard for White People to Talk About Racism – Robin Di Angelo

Robin DiAngelo coined the term ‘White Fragility’ in 2011. Using knowledge and insight gained over decades of running racial awareness workshops and working on this idea as a Professor of Whiteness Studies, she shows us how we can start having more honest conversations, listen to each other better and react to feedback with grace and humility.

It is not enough to simply hold abstract progressive views and condemn the obvious racists on social media – change starts with us all at a practical, granular level. ‘With clarity and compassion, DiAngelo allows us to understand racism as a practice not restricted to “bad people.” In doing so, she moves our national discussions forward. This is a necessary book for all people invested in societal change’ Claudia Rankine

7. Wish We Knew What to Say: Talking with Children About Race – Dr Pragya Agarwal

Wish We Knew What to Say is a timely and urgent book that gives scenarios, questions, thought starters, resources and advice in an accessible manner on how to tackle tricky conversations around race and racism with confidence and awareness. it brings in the science of how children perceive race and form racial identity, combining it with personal stories and experiences to create a handy guide that every parent would refer to again and again.

Written by behavioural and data scientist, Dr Pragya Agarwal, Wish We Knew What to Say will help all parents, carers and educators give children the tools and vocabulary to talk about people’s differences and similarities in an open, non-judgemental, curious way, and help them address any unfairness they might see or encounter.

This is a comprehensive history of Asians from the Indian subcontinent in Britain. Spanning four centuries, it tells the history of the Indian community in Britain from the servants, ayahs and sailors of the seventeenth century, to the students, princes, soldiers, professionals and entrepreneurs of the 19th and 20th centuries.

Rozina Visram examines the nature and pattern of Asian migration; official attitudes to Asian settlement; the reactions and perceptions of the British people; the responses of the Asians themselves and their social, cultural and political lives in Britain.

This imaginative and detailed investigation asks what it would have been like for Asians to live in Britain, in the heart of an imperial metropolis, and documents the anti-colonial struggle by Asians and their allies in the UK. It is an invaluable contribution to our understanding of the origins of the many different communities that make up contemporary Britain.

3 thoughts on “8 Books to Start your Anti-Racist Journey”