One article described the reactions of a couple in Yorkshire simply ‘looking to buy jam’ and instead coming across Gollywogs for sale in a shop. The couple where horrified and confronted the shopkeeper, only to be met with this response;

“She told me the dolls weren’t there to offend. I told her I was offended. She told me I was in the minority of people that were offended by them”.

According to the couple she also “tried to justify selling the memorabilia by pointing out that her husband was mixed race” and accused them of being “easily offended”.

Unfortunately, this isn’t an isolated incident, or one confined to Yorkshire. It’s happening in Cumbria too as we found out after a resident contacted us about a shop in the Lake District also selling Gollywogs.

At the time the resident had been visiting the shop with her brother and sister-in-law who are both Black Kenyans. They were all offended by the sale of the Gollywogs, but after confronting the shopkeeper about their presence, “he got very aggressive and ignorant, as did the other customers”.

In both these cases, there is a lot to unpick. From the classic referral to ‘my Black friend isn’t offended so it’s fine’ by the Yorkshire shopkeeper, to the aggressive response backed up by other customers in the Cumbrian case. There is a pervasive and complete disregard for the racist history that this doll is surrounded by and perpetuates.

But for those who argue that the Gollywog is simply a doll, that political correctness has gone mad, that ‘wokeness’ is taking away their right to collect the dolls with whom they have such happy childhood memories, here’s my reply.

The beginnings of the Gollywog lie in the stories and illustrations of Florence Kate Upton, born in 1873 and originally from New York. She moved to England and published an illustrated book called ‘The Adventures of Two Dutch Dolls and a Golliwogg’. The Gollywogg character was inspired by Black Faced Minstrel shows which were popular in the US. Black Face Minstrel shows were a performance where White actors would wear Blackface and draw on exaggerated features to create a cartoonish ‘Black’ character who they would then degrade and humiliate in the performance by portraying them as lazy, stupid, hyper-sexual and as criminals.

Inspired by this culture, Upton’s Gollywog was depicted with Black skin and similarly exaggerated with grotesque features. It became so popular it began to be mass produced as a doll and appeared across popular culture.

Perhaps the most famous use of the Gollywog character in popular culture was the Robertson’s Jam version. The Gollywog became part of their brand, and their version was proliferated on badges, knitting patterns, pens and everything in in-between. Despite growing criticism, especially since the 1980s, Robertson’s continued to use the Gollywog as a mascot from 1910 up until 2001.

The criticism Robertson’s faced was due to racism and the history of the Gollywog. Even a quick interrogation of the link with the Minstrel Shows alone makes a convincing argument for this. Obviously, the way in which the Black Faced Minstrel shows depicted Black people as sexualized and criminalized racial stereotypes was racist, but it was much more than this. David Leonard, a professor of comparative ethnic studies and American studies at Washington State University observes:

“They did it to authenticate their whiteness…It was the same as saying ‘We can become the other and mock the other and assert our superiority by dehumanizing the other’”.

As Leonard argues, the Black Faced Minstrel shows were simply “an assertion of power and control” and allowed “society to routinely and historically imagine African Americans as not fully human”.

Similarly, the Gollywog also perpetuated stereotypes and was part of the same “assertion of power and control” and the dehumanization of Black people. Although the original Gollywog was demeaning but portrayed as a ‘good’ character, as the trope proliferated the character was often type-casted as a villain. 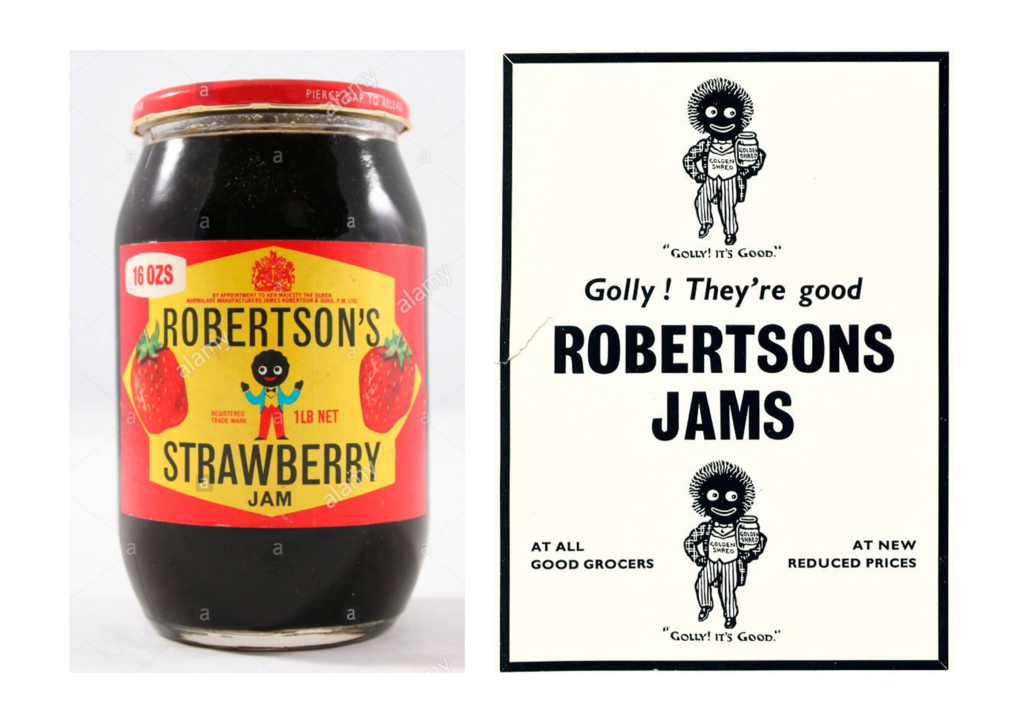 The true context, and the extent of the racism in the way the Gollywog character was used within literature is stark in this excerpt from Enid Blyton:

“Once the three bold golliwogs, Golly, Woggie, and N*****, decided to go for a walk to Bumble-Bee Common. Golly wasn’t quite ready so Woggie and N***** said they would start off without him, and Golly would catch them up as soon as he could. So off went Woogie and N*****, arm-in-arm, singing merrily their favourite song — which, as you may guess, was Ten Little N***** Boys. (p. 51)

The language in this except is enough to showcase the racism implicit in the Gollywog character, but I was shocked to learn that the ‘Ten Little N***** Boys’ song refers to a children’s’ poem which ‘celebrates the death of ten Black children, one-by-one’. Even if a defender of the Gollywog tried to argue that language has changed, that we can’t judge language from this era by the standards of today, the reference to this song exposes a sick dehumanization of Black children which is inexcusable and undeniably racist – regardless of the era. I can’t imagine a song about ‘Ten Little White Boys’, celebrating their death, making it into a children’s book – the racism here is clear.

Although this is a clear example of racism that few could dispute, the other less’ obvious’ uses of the Gollywog trope are just as racist and harmful. Another of Enid Blyton’s books, The Noddy series, were a prime example of this. One book in the series is clearly remembered by another Black member of Anti Racist Cumbria from when she was at school and many people still own and read them. It may be less ‘obviously’ racist as the characters have been replaced with Gobbo and Sly but the characters remain violent, ugly and evil. The power and racism perpetuated by the Gollywog has not disappeared.

What’s in a name?

The perceived innocence of the doll itself is further eroded by the name itself ‘Gollywog’ which is linked to the racial slur ‘wog’. The more we delve into this, the more it is impossible to disentangle the Gollywog so many associate with childhood playtime from very real and undeniable racism. But still, there are consistent attempts to claim the Gollywog is not in fact racist, for example in the current ‘trend’ to drop the end of the name ‘wog’ and only call it ‘Golly’. However, this does not erase its racist nature and those suggesting that by doing this they are somehow not being racist, are missing the point entirely.

But what’s so racist about all that?

Indeed, the whole argument that although the Gollywog is associated with these undisputedly racist realities it was also a beloved childhood toy for many (White) Children is an argument which is permeated by racism. This is due to the way in which it essentially weaponizes the fond memories of (mostly) White people to ‘trump’ the racial trauma directly associated with the same doll by many Black people.

Black members of Anti Racist Cumbria have commented on how the Gollywog was a constant source of attack during their childhoods. People would call them ‘jam jar kids’ and ‘jam gollies’. Their memories of that period can only be considered painful and traumatic and I can’t even imagine what that must have been like.

Another Black member of Anti Racist Cumbria, remembers the Gollywog in the Enid Blyton books all too clearly. At one stage, someone cut out a few lines from the book that said, ‘the three little gollywogs live here’ and pasted it on their front door.

This is real, persistent, and traumatic racist abuse, directly linked to the Gollywog doll. How can a fondness for a childhood toy possibly trump years of this collective racial trauma?

However, the International Golliwoggs (they use the original spelling) Collectors Club continues to defend itself against claims of racism by arguing that the character is not derogatory as it was not “intentionally produced to be humiliating”. It’s a bit like when you stand on someone’s foot by accident – of course you didn’t mean it, but that doesn’t mean it doesn’t hurt. It’s not about what was intended, it’s about the impact an action has on another human being, and this doll and all the racism it has perpetuated and been surrounded by has undeniably had a deep and harmful impact on Black people.

The Gollywog is not just a doll or a happy childhood memory, it is a symbol of racism and testimony to the ‘wog’ based racial abuse countless Black people have faced. For this reason, it has absolutely no place in modern society and certainly no place in a Cumbrian shop.